Searching sets up a story we’ve seen before — a parent searching for their child — but does it in a uniquely technical fashion while cleverly setting up red herrings and clues along the way.

What makes Searching unique is obvious — the story is told through screens, on computers and cell phones. It could have come across hokey and gimmicky, much like found footage films, or by what I assume Unfriended was received (has anyone seen that movie? Let me know)

The father, played by John Cho, does 90% of his sleuthing online, digging through his daughter’s social media, searching terms he’s unfamiliar with (#parents am I right?) and communicating via text, messenger and FaceTime. This creates a story that wouldn’t be better told in a traditional format. The discovery and the unearthing of Margot’s secrets is through her social media, so why not present the film in such a format that can take great advantage of that?

The animations and screen captures were smooth, transitioning from search results to videos and FaceTime conversations in a manner that reflects a person’s frantic search online for answers. 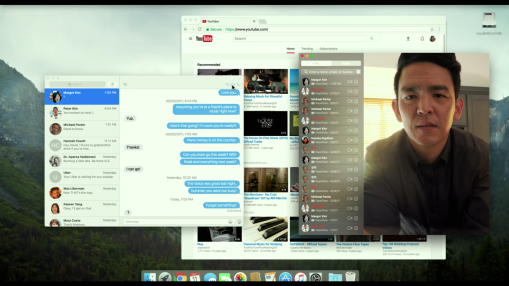 We’re introduced to the storytelling convention in a less frantic sense, in a sort of Up-style montage of moments that detail this family’s life on the computer. There’s an incredible amount of character development told through the Windows startup page to the photos and videos that document this family’s journey.

As details about the case are discovered and Cho’s character delves deeper into the mystery, clues are simultaneously revealed to the viewer. Eagle eyed observers might even note key plot details before Dad finds them, but it’s done in a way that doesn’t make you anxious for the characters to catch up with your conclusions. The twists are really well done and the ending features a spectacular 180 reversal.

It’s a really well done movie from both a technical and a writing standpoint. If you’d like to delve more into the making of the movie, check out the special features (available on the RedBox rental, so no excuses) and read this article AFTER you’ve seen the movie (be warned: spoilers). With this movie, the viewer’s search for the truth should coincide with the father’s.