There’s a lot of great things going on in the animated film Spider-Man: Into the Spider-Verse. The minority lead is incredibly engaging and the first in-motion Spider-Gwen was everything I wanted her to be. I’m secretly hoping she’ll get her own film some day. Combine that with a worthwhile story, heartfelt interactions and pulse-pounding action — you’ve got yourself a fun ride. 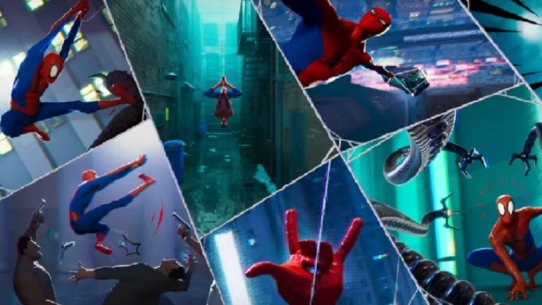 Having this story animated (instead of live action) allowed for some stylistic choices that celebrated both animated and print formats. Especially after Miles gets his powers, the story is presented more and more like a comic book, including thought bubbles and descriptions that pop up on screen. Unlike its comic roots, the film uses these staples of the print format in dynamic ways. Thought bubbles pop up after Miles as he’s running down a street, panel lines slash through the screen and present multiple images at once. It’s a comic on speed and you can’t look away.

Coupled with the general layout of a comic book, the animation is lush with vibrant color. The colors are as vivid as our main character himself, who sings to get himself in a good mood and is full of energy. Adding this to our smooth animation, and 2-D/3-D presentation (even when viewed in standard format, you can tell how much depth the 3-D version has) and you’ve got a visually breathtaking actiony romp. But even with that color and fun, there’s still some darkness to be had, making this a film that’s not just emotionally investing for young viewers.

Another great stylistic choice was to have the spider-people of different universes look and behave different. Spider-Ham (yes, a spider-pig) is more cartoonish and uses weapons that would have been at home in a Bugs Bunny cartoon). Spider-Noir is depicted in black and white and he can’t see color. Peni Parker is decidedly more anime. This design choice follows when we get glimpses into their worlds in their intros and near the end. Different shapes, color-schemes and physics accompany the buildings and sights populating from the other worlds.

Spider-Man: Into the Spider-Verse is a fantastic addition to the Marvel universe, referencing all the Spider-Men that came before it while securing its own important place in heroic cinema. It’s a fantastic animated film, but it’s also just a really good film in its own right.

^ Is that even the right question?

Often I hear from people new to the film industry who want to know if they should attend film school to get a leg up. I can’t give them a straight answer.

Years ago, I too was wondering the same thing. Growing up in rural Pennsylvania, with nary a film production to be seen, I didn’t know how I was supposed to “get in” especially when I couldn’t afford a plane ticket to LA, let alone the cost of living there while trying to break into a notoriously difficult industry.

I eventually found myself completing a Masters of Fine Art in Film and Television at the Savannah College of Art & Design. My time there was awash in good memories — I met some amazing friends I’ll carry with me the rest of my days, as well as picking up select skills — such as the Steadicam — that I may not have had the opportunity to try out otherwise. But still, I sometimes look back on my time at SCAD and wonder “Was it worth it? Should I have skipped the school?”

If you’re wondering why I still have those doubts, even after having graduated four years ago, it’s because when I look at my student loans, I begin to feel faint and need to find something else to do. It’s also because of how I calculated what I was paying per class period, and certain classes that didn’t live up to expectations.

Some of the best film makers and cinematographers I know personally today were self taught or were brought up in the ranks of hierarchy on film sets over time. I also know some who went through film school and have nothing more than an ego to show for it.

The answer to “How do I break into the industry?” is never going to be a simple formula and no two paths are the same.

So, how do you break in?

The most common paths are variations on these — please note that these are aimed towards the Camera Department since that is mostly what I’m familiar with:

1.) Film School: After or during school, start getting on “real” sets, most likely as a production assistant (read: entry level) or, rarely, jump right into camera assisting/producer assisting/etc.

2.) Work at a Camera or Equipment Rental House, gaining knowledge and experience working with the equipment. Get hired on sets. Work your way up.

3.) Get on sets as an office or set production assistant. Slowly migrate into the department you are interested in. Impress people and try to move up the ladder.

5.) Be related to Spielberg/Nolan/some big whig in the industry already.

All this circles back to whether or not film school is the answer for you. I don’t feel my job is to convince you one way or the other. Rather, I feel a list of pros and cons is more helpful, to allow you to make an educated choice.

Direct access to professional equipment without rental costs and insurance.

Professional networking at the student level. Film school is where many of the greats of filmmaking met for the first time. Maybe that will be your story too.

Directors/Cinematographers/Producers who are easily accessible because they’re grading your homework as professors at the school.

Amenities: professional equipment, film festivals sponsored by the school, meet and greets with industry professionals who might talk to your class.

Certain Classes. I’m still mad about Professional Development, a class in which we basically paid full price to just work on our own stuff.

Limited scope. Students who are into non-traditional forms of telling a story, such as with experimental film, may feel limited by the standard Hollywood method taught at school.

Lack of resources. Along with the pro of having equipment and space to borrow for free are the limits of actually getting those things when they are in high demand.

In many ways, attending SCAD was the best thing I’ve done to get myself into the right trajectory for what I’m doing now. I’d never have picked up the Steadicam and I’d never have made the connections I did. But I also know that it would have been possible (but not guaranteed) to get where I am now without the tuition cost.

Deciding whether or not to attend film school is a big decision. Until you’ve made that decision, you can check out this book: