I’m always late to get into the newest Netflix trends. My latest acquisition, The Dragon Prince, I binged all three seasons over New Years. I loved the series, and I had to talk about it.

I just finished @netflix ‘s #TheDragonPrince and I’m chock full o’ feelings. A lot of the great world building I adored from Avatar the Last Airbender with an all new diverse cast and a timeless story.

So glad you liked it! If you’re looking to keep binge-ing into the new year, check out Wakfu – it has a lot of the same things you liked about The Dragon Prince 😄 #whattowatchonnetflix

Got halfway through Ep 1 of Wakfu. Not the same. Nice try, Netflix.

The Dragon Prince is a beautiful and dark fantasy epic. Two human princes and a Moonshadow elf must bring the young dragon princeling to his mother in the land of Xadia in order to end the war between their peoples. They face all sorts of death-defying odds and fun magic adventures with a healthy dose of humor.

What’s great is it’s incredibly diverse cast. Women are portrayed alongside men in combat. General Amaya is mute, and communicates only with sign language. There’s several LGBT characters and it’s not made a big deal of. There’s also wonderful themes of finding yourself and helping others at any cost.

TDP reminds me of one of the best animation series I’ve ever watched — Avatar: The Last Airbender. In fact they share some crew, including a voice actor and the head writer on ATLA Aaron Ehasz, who is showrunner for The Dragon Prince.

Unfortunately, after I tweeted my love to the two people on Twitter who see my posts, I uncovered the controversy associated with the showrunner, and why there likely won’t be a Season 4. Several women accused Aaron Ehasz of misogynistic behavior.

After the trailer for Season 3 dropped in November 2019, several women started talking about their problems with the company.

Lulu Younes said she needed to leave the company for her own mental and emotional health:

Danika Harrod, the former Head of Community Development at Wonderstorm (TDP production company), also said her experience was “painful” and what she witnessed drove her to leave the company. “It was just so much shutting women down, not taking women seriously, not listening to women, firing a woman and then shit talking her” Harrod stated on her Twitter account.

At least three women left the company. Soon to be followed by co-producer of TDP Giancarlo Volpe, though it isn’t clear if it’s in relation to the allegations.

Then there’s this thread by Diandra @Work (@MesaanaSedai) who worked with Aaron — this time at Riot games. As an editor, she was in charge of making sure the narrative of what they were producing was consistent. Instead, according to her, Ehasz usurped her job and make it a team activity, all while treating her as a personal assistant.

Her experience is worth noting, as it corroborates the other women’s accounts. 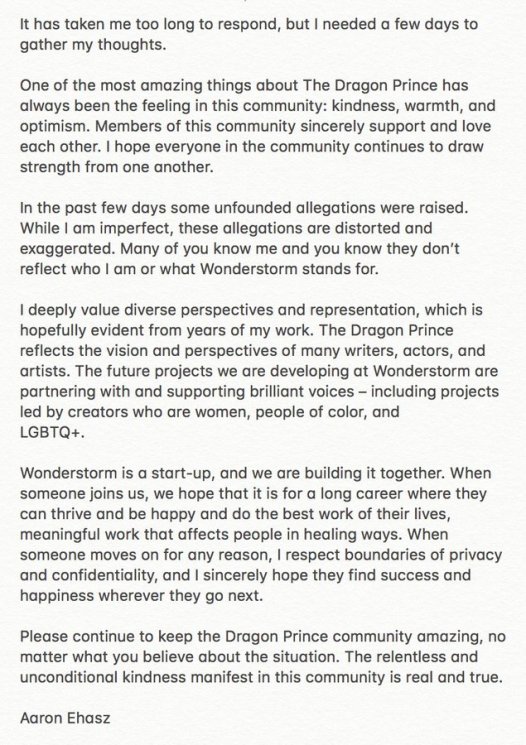 The comments on Ehasz’s response were a mix split between indignation that he avoided the allegations to promote his own company, to people claiming they’d never believe the women. “If they have proof, awesome, but I’m not going to believe the rumor mill on social media,” one commenter stated. “Word of mouth is not proof, sorry. Camera footage from the offices is proof. Text messages or emails are proof.”

But that’s the thing about workplace sexism and gaslighting — it’s not something that’s often handily encapsulated in an email or text message. It’s an employer or employee acting in the way that these women described — not respecting them or their jobs and treating them a particular way because of their gender.

This inherent disbelief of women’s experiences is the very reason why they don’t come forward on these allegations in the first place. They’re afraid they won’t be able to work again. Television is a flighty career path — cross the wrong person and you find you never work again.

A company — and the product it creates whether it be a TV series or video game — benefits greatly when you bring a variety of voices to the table. That’s why seeing this kind of controversy associated with a piece of media I really enjoyed is so upsetting. It’s why seeing articles like this after the #MeToo movement is head-smacking-against-the-desk frustrating.

I may be slow on the uptake when it comes to watching the latest Netflix craze, but the powers that be are incredibly slow in treating their women employees as equals — and that needs to change.

The Dragon Prince is still a beautiful series, worthy of being made an example of for its incredible characters and deep world building, though the real stories behind the scene do negatively color my experience. Luckily the women who had to leave the company found good jobs, but the problem of gaslighting still persists. Let this be a two-fold lesson: How to write a good series …and how to treat your employees as people.