The Boys is an answer to the movie theater dominance of superheroes, and a true “what if?” scenario if super powered individuals existed in our world. Supernatural and Timeless creator Eric Kripke brought the Garth Ennis story to the screen in an eight episode run on Amazon Prime, and it’s unlike anything available in the multiplex or on The CW. 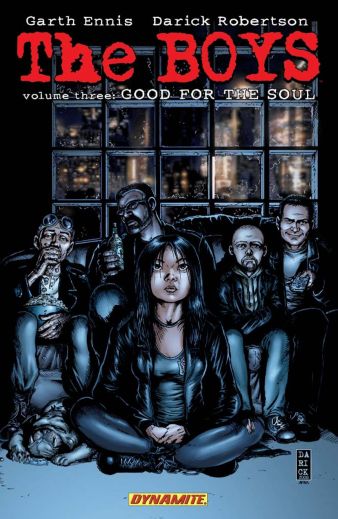 Watchmen is the Hugo Award Winning graphic novel (published first as 12 separate issues in 1986-87). It’s widely held as the best graphic novel of all time, and ushered in an era where comics could be considered for grown-ups as serious literature. It contained deep themes and stakes hardly seen in comics before. It was truly not meant for kids content-wise, but featured important narrative commentary on vigilante justice, the arms race and even one’s own identity when faced with an ugly truth.

Watchmen was revolutionary for its time, and continues to make its mark on the world of comics. The Watchmen movie adaptation by Zack Snyder came out in 2009. A run of “Before Watchmen” comics series came out in 2012. A Watchmen HBO series is projected to premiere October 2019.

The Boys is the Watchmen of the current decade, daring to go those extra steps further in ways that have hardly been tread since Alan Moore’s masterpiece graphic novel.

Familiar Faces (Imitation as the Sincerest Form of Flattery?)

Most of the superhero group The Seven are obvious analogues of DC heroes: Homelander is Superman, Queen Maeve is Wonder Woman, The Deep is Aquaman, and A-Train is The Flash. Besides the powers, that’s about where the similarities lie. These are not heroes striving for truth and justice in a cruel world. These are power-hungry people who are scary to all who meet them, and casually sweep accidental deaths under a corporate rug.

We meet this world through two sides of the story: Hughie, a normal guy, who is accidentally swept into the world of supers when his girlfriend is murdered. He is recruited into “the Boys” a group of people who actively work against the supers. On the flip side is Annie aka Starlight, who is inducted into The Seven. Her wish of being a famous superhero comes true, only for her to see the seedy underbelly of the Vought Industries superhero enterprise.

Watchmen also had familiar characters – Nite Owl is a slightly more chipper Batman, Doctor Manhattan is the ultimate Ubermensch or Superman, Rorschach could be The Question.

With Great Power Should Come Greater Accountability (Especially for Supers)

Watchmen’s most iconic phrase is “Who Watches the Watchmen?”  It asks where the line exists for vigilantes. It’s a theme that’s revisited in the mutant registry of the X-Men films, the superhero ban in The Incredibles and even in the aftermath of the Sokovia accords in the Marvel movie universe. 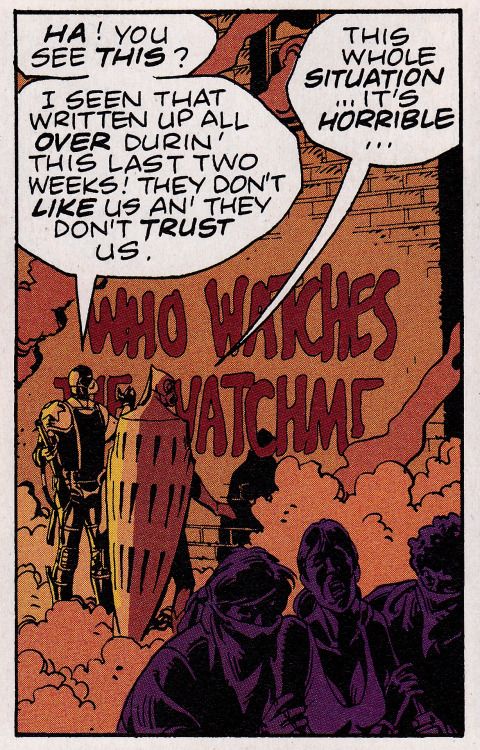 The Boys shows how the superheroes are protected from any backlash by corporate cover up, where people are paid off so the truth doesn’t come to light.  We see how scary an unchecked Superman (Homelander) can be. Vought International is an analogue of Veidt Industries, the company run by Adrian Veidt in the Watchmen storyline, right down to the superhero action figures and the fingers in every proverbial pie.

Sexual Assault in the Workplace (#MeToo with Costumes)

Another theme that both Watchmen and The Boys explored was sexual assault in the workplace.

From here there be major spoilers. You’ve been warned.

The fact that the assault on Starlight is used as an impetus for her to grow bolder as an individual is a refreshing break from the idea of perpetual victimhood. Yes, she’s seriously affected by the encounter, but she takes steps to make sure it doesn’t happen to anyone else.

There’s also a parallel scene where The Deep, her rapist, has a similar experience with a creepy, rabid fan. It should be a moment for the audience to cheer “You got what you deserve!” but the way the scene is handled…vengeance does not feel good.

Vengeance! (Not all it’s cracked up to be)

This is yet another theme that Watchmen and The Boys handle exceptionally well. Hughie is set on a dangerous path when he seeks justice — at any cost — for Robin’s death. It’s clear after his decision to join The Boys he’s in over his head. Vengeance comes up later for one of our “heroes” when seeking the truth about an origin…though this person doesn’t seem to have the capability of caring about consequences.

I didn’t think I’d like The Boys as much as it did, but once I got over the initial shock of the events of the first episode, I was hooked. I’m going to need a season two.